Members of the Harriet Wilson Project with Governor John Lynch. (2006) 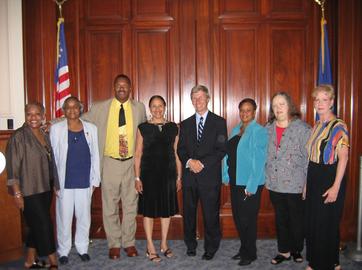 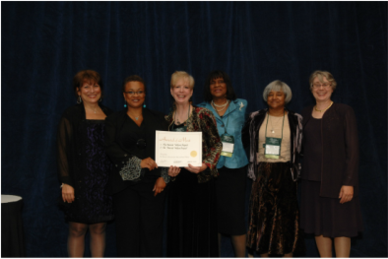 The Harriet Wilson Project was officially established in 2003 under the leadership of Founder, JerriAnne Boggis and Founding Mothers, Mabelle Barnette, Gloria Henry and Claudette Williams, as a response to an op-ed in Milford's local paper outlining why Wilson's novel should not be studied at the high school level.  The group later expanded to included historian Barbara White, author Stasia Millett, and artist Napoleon-Jones Henderson.

The goals of the Project were to:
◊ Sponsor statewide book discussions of Wilson’s work
◊ Organize panel discussions of Wilson’s contribution to American literature and history
◊ Work to incorporate Our Nig into the NH secondary school curriculum
◊ Sponsor and facilitate high school participation in the creation of an Art mural for the state
◊ Orchestrate the creation of a memorial monument for the town of Milford

By promoting New Hampshire’s Black heritage and acknowledging the contributions made by Wilson and other African Americans to New Hampshire’s history and culture, the Harriet Wilson Project works to foster an appreciation of diverse ethnicity and create an inclusive climate.